The Israeli Defense Force's Caterpillar D9 bulldozer looks like something R* would call the Dozer Mk. II and release in an update.

The Israeli Defense Force's Caterpillar D9 bulldozer looks like something R* would call the Dozer Mk. II and release in an update. 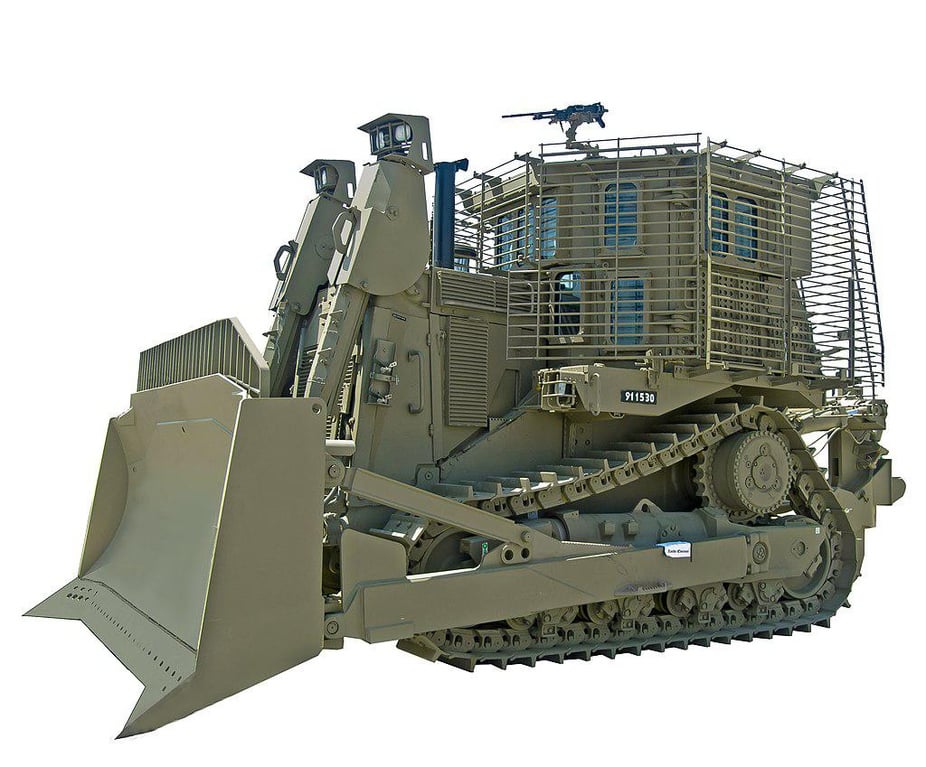 Also It can fucking fly.

That actually happened, look up the 1932 emu war

I expected a meme but it’s real

IKR it cracked me up when I found out about it

Wtf does Israel use this for You know what. Never mind. Ignorance is bliss

It might be better not to look up if you want to keep faith in humanity. I wonder about the Aussies tho. Damn koalas?

Coming from an Aussie mainly kangaroos or emus

Your up againts the wall and I am the fucking wall!

Oh ya, I remember, the "Defense" Force. Defensivly expanding the borders by bulldozing defenceless villages. There is pun in there somewhere.

was thinking the same. What type of defense force needs a fucking bulldozer

the same one that murders innocent people and tears down entire villages and evicts anyone who's not Israeli, from the palestinian's indigenous land. those sad excuses for soldiers disgust me.

I have (had) a friend who recently moved to Israel to get in touch with her roots. While I wholeheartedly respect that decision and her desire to explore her religious and cultural heritage more, some of the points she gave me when we debated on this topic were delusional. Earlier this year when Israel was moving into more neighborhood the excuse she gave me was “they started attacking us first in the mosque”. Didn’t know that a group of people throwing rocks meant a full military retaliation with armored bulldozers tearing down houses and displacing thousands.

I need a slingshot added so I can drive one around 🤘🏼

Yeah, give us a slingshot atomizer!!!

and sell it for $6 million.

That shit looks like something you'd see in metal slug.

Nah mate no need for that, in los santos are no homes of muslims that can be destroyed.

Luckily in los santos there aren't any muslim terrorists.

There aint no muslim terrorists in israel either, yet their houses get mowed down by these dozers.

You realize that Hamas is literally the elected leadership of Gaza, right? https://en.m.wikipedia.org/wiki/Governance_of_the_Gaza_Strip

That's probably the most ignorant comment i've read my entire life. Their house gets mowed down becsuse they're terrorists

"Their house gets mowed down because they're *terrorosts*". That's probably the most ignorant comment I've read in my entire life.

How can you possibly be so misinformed. There have been *some* Islamic terrorists in Israel, but Israel has not restricted its actions to just the terrorists, but to Muslims in general.

not to mention said groups attacked other Muslims as well, the fedayeen caused a civil war in Jordan. There are Palestinians who are innocent and the minority of power-hungry assholes. But of course to a conservative anyone who opposes any decision by the American government is a full-blown terrorist right?

Some ? There's terrorist attacks by muslims almost every single day. Just because you don't hear about it doesn't mean it doesn't exist. Israel is mowing down the houses of terrorists and by doing that they are punishing the terrorists entire family which isn't right.

Israel is thought to have a 7:3 civilian to combatant kill ratio. In other words, of the people they have killed in open war, 70% have been innocent civilians. On top of this, these very bulldozers have been repeatedly employed to destroy all crops and roads in the buffer zone between the Gaza and Israel, causing massive harm to the innocent farmers. They have employed aerial herbicide against these same farmers. They have demolished 1,097 homes between 2004 and 2020, leaving 3,579 people homeless, 1,899 of which were minors. These demolitions have not been limited to terrorists. Not even slightly. Entire villages have been decimated, animal shelters and toilets have also been targeted. Many were also apartment buildings. These are not the homes of terrorists, hell many of them aren’t even homes at all. They tore down over 70 Palestinian homes by their border in one go, not because 70 terrorists had all sprung up from there, but because they wanted them gone. You are ignorant and you are a fool if you cannot see this.

This is what Rachel Corrie laid down in front of and then was astonished when the operator couldn't see her and she got run over and killed.

Wasn't this what was used to bury a bunch of Iraqis alive in 1991?

they just use this to destroy people’s homes these days

Well yes, the Israelis do, but I'm talking about when it was in US service.

Those were Abrams tanks, and it was soldiers using landmines in violation of the Geneva conventions, so, quite literally war criminals

Nah this would be called the Dozepressor and then a few months later a Dozepressor MK II will release that can fly. Both can withstand an ungodly amount of explosives and have homing missiles. Making it an even more broken version than the already existing Oppressors.

Yeah if we could like, stop paying for Israel to exist, that would be greeeeaaaaaaaat.

And of course they just slapped a Negev on the roof because why not.

OP said it was Israeli, and Isreal uses the Negev as their LMG. Also the M60 feeds from the left and ejects shells out to the right, but the LMG in the pic seems to have an ejection port on the left side.

Still not as cool as the og killdozer. And less heavily armored.

I've posted literally this CAT like a week ago

Nah, that would go to the killdozer

When they push back a crowd they don’t fool around!

Imagine driving down the freeway listening to Rebel Radio in that thing!

Yes. But only if we also get a slingshot atomizer as well.

Vaguely reminds me of the armored boxville for some odd reason