I hate the idea that corporation is making money using our identities and calling themselves queer allies but I know that representations matters if we are going to make a better future.

I hate the idea that corporation is making money using our identities and calling themselves queer allies but I know that representations matters if we are going to make a better future. 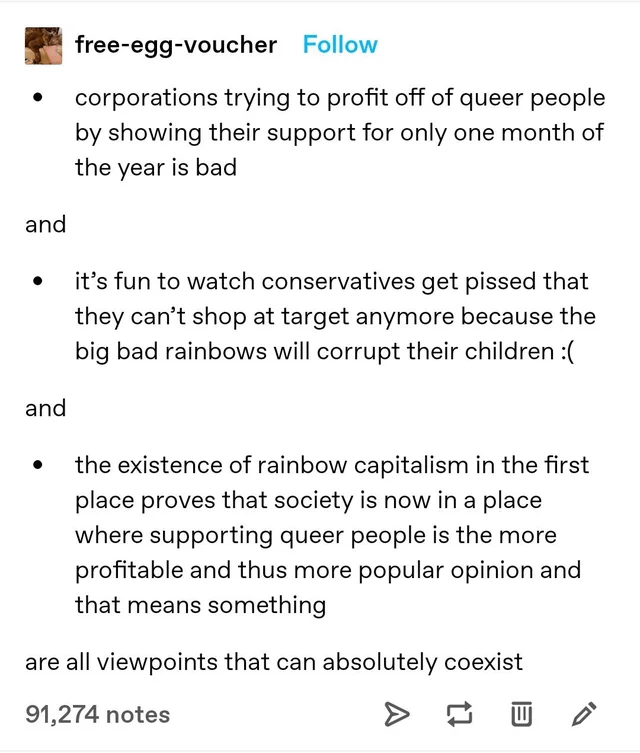 While I'm not for only supporting when it benefits you, I AM for pissing off conservatives and homophobes and all else like them.

Oh it always will be.

I see it like that, most companies use lgbt+ in this month just to make more money and we are reaching more people and get more attention.

Although I certainly agree that all these opinions can logically co-exist *on paper,* in practice I have my doubts. It appears to me that whenever there is any mention of Pride on social media, even on platforms that are supposed to be heavily pro-LGBTQ+, there is an absolute inundation of comments from people basically saying they hate Pride because "it's become so commercialized" and they just "hate rainbow capitalism." Don't get me wrong: this is a valid criticism by itself, but the sheer volume of people expressing negative attitudes about Pride as a whole because of rainbow capitalism makes me suspect that this is not, in fact, about critiquing capitalism at all. Given the global context of these comments, with countries such as Poland, Russia and Hungary actively pushing back against any form of queer representation, I'm starting to believe that this is just a way for homophobes to express their hatred in a manner that can be deemed socially acceptable even in progressive circles. It is a way to sneak homophobia into public discourse and ultimately undermine queer rights and representation. Remember that, as long as we live under a capitalist system, there are only two possible worlds: 1. A world where rainbow capitalism exists. 2. A world where queer people have no rights. There is no middle ground. Therefore, under a capitalist system, if companies cannot show any affinity towards the queer community unless they "truly care," then a large portion of queer representation will simply disappear. This does not advance queer rights at all; it *harms* us. The bottom line is that these negative attitudes do more harm than good. Yes, rainbow capitalism is still soulless capitalism and therefore bad, but *we cannot do better under a capitalist system.* As long as capitalism exists, critiques of rainbow capitalism can essentially be used in order to undermine Pride and harm queer representation. We cannot have it any other way. This is what queer representation is in a capitalist world. So can we please stop arguing about how Pride has become too commercialized? Valid as these critiques may be in principle, they open the doors to homophobia by making it acceptable to hate on what is probably the most important thing the queer community has: our pride. It accomplishes nothing except to weaken us.

Totally agreed! You're still getting soulless capitalism under this system no matter what, so we may as well use it to advance our causes while we can.

I've been railing against this lack on nuance in objection to rainbow capitalism for months now and this is the first time I've seen someone make this point so eloquently. Thank you so much.

"There's no such thing as bad publicity". As someone once put it, I agree with your statement.

I feel all three of these simultaneously.

Just a reminder that these companies will gladly take your money, [And use that money to take away your rights as well.](https://www.businessinsider.com/amazon-walmart-mcdonalds-companies-show-pride-donated-anti-lgbtq-politicians-2021-6)

Our identities are finally being exploited by capitalism, just like everyone else has been.