The Lego "traps" my son makes to keep the monsters out of his room. 100% success rate so far.

The Lego "traps" my son makes to keep the monsters out of his room. 100% success rate so far. 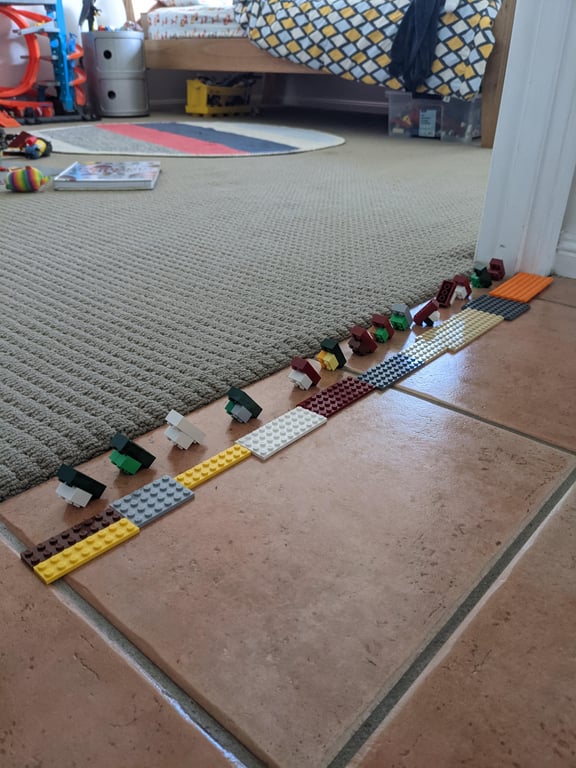 EchidnaRider, thank you for your submission. It has been removed for violating the following rule(s): --- - Rule 5: Posts must follow all [title guidelines](https://www.reddit.com/r/pics/wiki/titles). --- For information regarding this and similar issues please see the [rules](https://www.reddit.com/r/pics/wiki/index/) and [title guidelines](/r/pics/wiki/titles). If you have any questions, please feel free to [message the moderators via modmail.](https://www.reddit.com/message/compose?to=/r/pics&subject=Question%20regarding%20the%20removal%20of%20this%20submission%20by%20/u/EchidnaRider&message=I%20have%20a%20question%20regarding%20the%20removal%20of%20this%20%5Bsubmission.%5D%28https://redd.it/oipgt1%3Fcontext%3D10%29)

If your son is laying Lego traps for monsters - 'tis he who is the monster.

Fighting fire with fire works in some scenarios.

School boy error. Everyone knows the monsters live under the bed.

Kid’s actually trying to keep the monster trapped in his room the sadistic fuck!

*Loads the shotgun and pumps one in the chamber*

Have to get there _somehow_

You put "traps" in quotes, but have you ever stepped on a Lego? That stuff can drop a 250 lb man.

Yeah pretty sure these are forbidden under the Geneva convention

And the way he set them up so the big blocks will dig in at 45 degrees. Little dude weaponised lego.

Pretty sure a 2x2 block would destroy a hydraulic press.

Well his son's name is Oedipus.

Multicolor thin line of legos don't make for much of a trap.

Until you accidentally step on it.

"Now I am become Death, the destroyer of worlds" - Your Son, probably.

On Christmas Eve when I was about three years old, my parents explained to me that a fat, jovial man with a bushy beard was on his way to break into our house. I responded with the appropriate amount of panic, only calming down after being told that the interloper was going to bring me some new toys. Even then, though, I was *incredibly* worried that Santa might try to visit me in person... so my father helped me write a brief letter to the man (using my child-size easel), in which I requested that he stay away from my bedroom. I remained undisturbed all night, meaning that the message was completely effective. Anyway, if your son ever gets tired of constructing traps, you can tell him that a stern note will work just as well. Monsters – much like Santa Claus – are notorious for their tendency to obey any and all official signage.

The Lego caltrop is the invention of either a genius or a future war criminal.

Those would keep even me outsite, i step on sooo many lego pieces already. Its worse than breaking bones, pure suffering for the few minutes after.

Those are 'trops not traps, as in caltrops.

Caltrops are excellent against a calvary charge, not so much against monsters.

Until they step on them

works on parents too

What about the monsters that float or crawl along the ceiling?

My feet hurt just by looking at this

I thought this was against Geneva convention regulations

As adorable as that is, your son is committing a war crime

Definitely need a backup wall under the bed incase they breach the perimeter.

Lol this kid literally made some lego caltrops 😂

Did anyone ever figure out what was wrong with the title that got it removed?

I believe I broke the rule about sharing friends or family works. I dunno though I got the shits about it being removed and didn't ask.

How did he keep the room from being a mine field?

Shouldn't he set up a line of defense for the ones that come up under the bed like in Little Monsters?

Those would keep even me outsite, i step on sooo many lego pieces already. Its worse than breaking bones, pure suffering for the few minutes after.

My 5yo autistic foster son does this with matchbox cars which he sorts by colour. So far, so good.

Shh sshhh shhhh you hear that noise...? No noise... Means no bees

Pretty sure this was outlawed by the Geneva Convention!

I used toy soldiers and those fuckers turned on me. And I had worse nightmares… should’ve gone with the lego barricade

Oww, I can feel that. Remember to lift your feet! Lego hurts. Smart kid. Out of the box thinker.

In my house we have a very useful rule: The only monsters allowed in the house (and that includes the garden) are "frengly" monsters. Any monsters that are mean or scary aren't allowed, and the frengly ones eat any that try to come in, unless they become frengly :-) Also, you'll notice that teddy bears never close their eyes, because they're always looking out for naughty monsters who try to break the rules! My little girl is older now and can even pronounce "friendly" but we still giggle about scaring away unfrengly monsters :-P

Sam and Dean had it wrong this whole time

Does he wear a little bow tie and ride around on an old timey tricycle?

He should make the monsters work for him. Less effort and he gets some henchmen to do his bidding.

EchidnaRider, thank you for your submission. It has been removed for violating the following rule(s): --- - Rule 5: Posts must follow all [title guidelines](https://www.reddit.com/r/pics/wiki/titles). --- For information regarding this and similar issues please see the [rules](https://www.reddit.com/r/pics/wiki/index/) and [title guidelines](/r/pics/wiki/titles). If you have any questions, please feel free to [message the moderators via modmail.](https://www.reddit.com/message/compose?to=/r/pics&subject=Question%20regarding%20the%20removal%20of%20this%20submission%20by%20/u/EchidnaRider&message=I%20have%20a%20question%20regarding%20the%20removal%20of%20this%20%5Bsubmission.%5D%28https://redd.it/oipgt1%3Fcontext%3D10%29)

If only I was this smart in my childhood.

He tryna kill somebody

Fo and buy a toy monster. Lay it across the trap gently. Record and play some sort of monster sound. When the kid wakes up he will find the toy and think that his traps turn monsters into toys. Confirm this as scientific and say that peeing the bed will probably turn them back into monsters though. Boom. No more bed peeing.